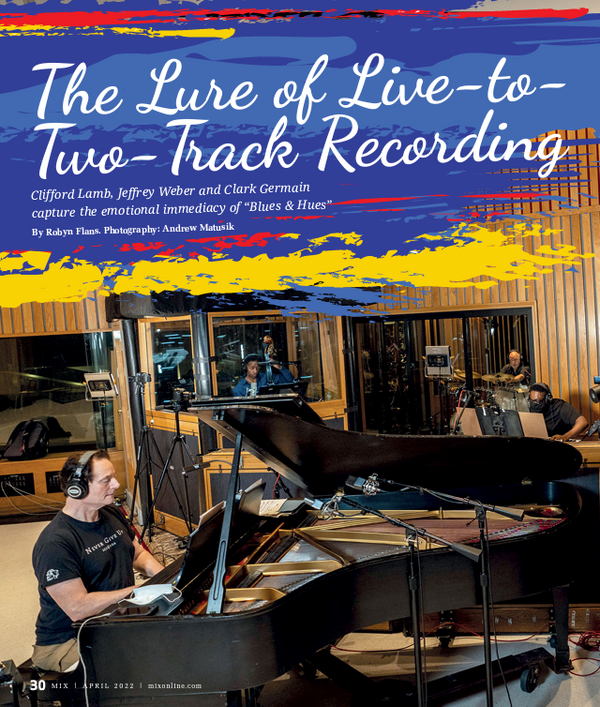 There was a poetic justice to the sonic unity of eclectic elements in Capitol Studio A, where Frank Sinatra once crooned and the Beach Boys launched their career. On a Saturday afternoon in February, artist/pianist Clifford Lamb assembled a group of stellar musicians to complete the live-to-twotrack recording of Blues & Hues New York, begun at Power Station studios in Manhattan and on this day making a stop at Capitol Studios in Los Angeles.

“Just music,” is what Lamb calls it. And no, live to two-track, in which the music is played all the way through, no overdubs, and mixed on the spot, was not at all daunting. Lamb has been playing piano since age 5 and discovered jazz at 16.

Pianist & Composer Clifford Lamb at Capitol Records in Hollywood, where he is recording part of his Live-To-Two-Track series Blues & Hues

“I feel very comfortable with the process,” he asserts. “I’ve always been very accurate.” Although not intimidated by recording live, Lamb did acknowledge that he had to change his mindset. “I was looking for the perfect album,” he says. “So when you start working in live-totwo-track, you have to change your outlook on absolute perfection. But it has taught me to play better and better—when you play with people like [drummer] Peter Erskine, you have to.”

Lamb began working in the live-to-twotrack arena in 2015 after meeting producer Jeffrey Weber, who is well-known for working in the format, including on projects with McCoy Tyner/Jackie McLean (It’s About Time), David Benoit (This Side Up); Tom Scott (Desire); Toni Tennille (More Than You Know), and Freddie Hubbard (Ride Like the Wind), among others. 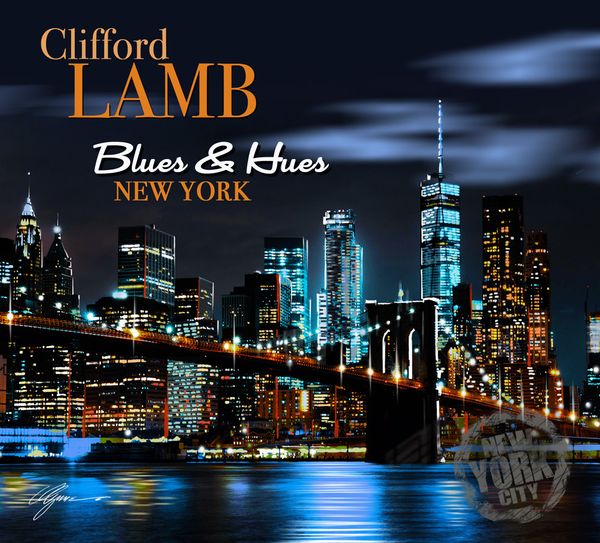 This record will be Lamb’s second in the series called Blues & Hues, in which he explores, through music, the cultures of the different cities where the group of artists record. The first was done in New Orleans. The bulk of this current project was finished in New York, with Carl Allen on drums, Christian McBride on bass, Wayne Escoffery on sax and Jeremy Pelt on trumpet.

Weber explains the format by asking people to think back to the time when technology graduated from mono to stereo: “That’s live-totwo-track,” he says. “The perception is you just press Record and go, but there is so much more to it now. Live two-track recording captures a performance rather than manufactures one. There is no going back, there’s no safety net for musicians or singers, and there’s no editing.  There’s no overdubbing, no autotuning—there are those who cannot survive without multitrack recording and the ability to go in and fix.” 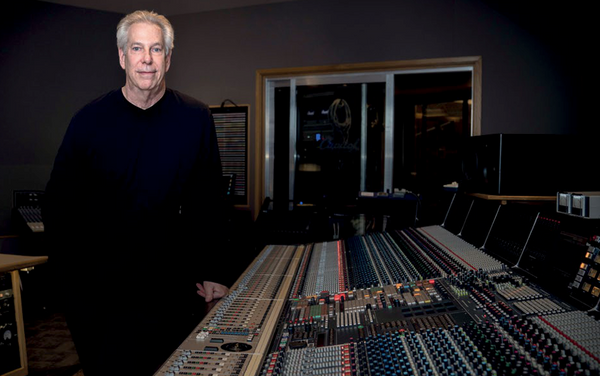 MANY  MICS, JUST 2 TRACKS
Weber began his recording career with the much more complex direct-to-disc process, in which an entire side of vinyl had to be recorded live at once, error-free. Live-to-two-track, Weber asserts, is still far superior to multitrack recording. The secret, he says, is in the immediacy of the live performance. Capturing that immediacy, he adds, requires an engineer who knows the format inside and out, starting with proper mics and mic placement.

Engineer Clark Germain has been working with Weber in this arena since 1988. Germain says he was lucky enough to learn from the best, sitting behind Al Schmitt and Bill Schnee for a time, and later working with producer/engineer Allen Sides on some live-to-two-track projects. The entire process, he agrees, can be challenging.

The artist is the main concern. He and Weber had worked with Lamb before, so Germain brought his own pair of AKG C12As to mike the piano and his own Pueblo Audio preamps to keep the piano sound as consistent as possible while traveling to different cities. One mic over each soundboard.

“I’ve seen people move the low soundboard over quite a bit further than I do,” Germain says. “I keep them a little more up toward the hammers and angled toward each soundboard— the low and the high.”

Engineer Clark Germain at the 72-input Neve 88RS in Capitol Studio A, with assistant engineer Nick Rives in the background

He has a standard jazz go-to mic setup for drums. Generally, there are three toms, but Peter Erskine had four on the Saturday at Capitol. Germain used a Neumann U47 Fet on the outside of the kick drum, with a Sennheiser 421 inside (“to get some click if I need that”). He prefers to use AKG C12As on the toms, but Capitol didn’t have enough on hand that day, so he used a single C12A on the top two toms and a Sony C37A on each of the floor toms. On the snare top, he uses a Shure 57, and on the bottom has an AKG 451 with a 20 dB pad. On the hihat he set up an AKG 451 with a 10 dB pad. For overheads, he used one capsule of two C24s.

Down by the bridge of Edwin Lingston’s bass, he placed a Neumann U 47, with a U 67 set above the fingerboard. On Justin Klunk’s sax, he used an RCA 44 and his own U 47, which he says he will put up against any U 47 in the world. (“I did a Sting record with ‘Ethel’ and he fell in love with her,” Germain says of the mic named for his aunt, who passed away right before he bought it. Ethel, he says, is famous among his clients.) “The sax mics were placed with the 44 above Ethel and both capsules facing down toward the bell, about halfway up the keys.”

For Anacron, the vocalist, Germain chose a Shure SM7. “It was a rap, so I wanted him to be able to be right up on top of it,” Germain explains. “I didn’t want to have to deal with any overload on a capsule or anything.” Producer Jeffrey Weber Room mics, primarily used to capture the piano, were Sennheiser MKH 800s, in cardioid and set eight to 10 feet away, up in the air... 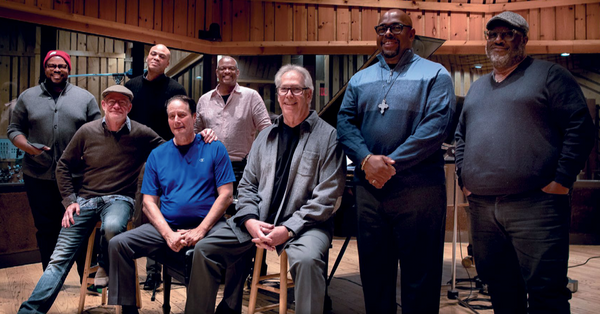 SETTING UP THE MUSICIANS
“Based on their given output, I will place [the musicians] in a different position in the room because I know I will get leakage in the piano mics, and I either want that leakage or I don’t,” Germain explains. “Depending on whether it’s good leakage or bad leakage, I will move them closer or further.

“If everybody is distinct and separated, I lose some of that,” he continues. “So I will take the horn, generally, and the singer sometimes, and put them in the room with the piano because then they are going to spill into the piano like they normally would, and you would hear them like you would if you were sitting right in front of them.”

At the Capitol session, in addition to Lamb, Erskine and Anacron, the group of stellar players— Edwin Livingston on bass, Dano Torimiro, keyboards and Justin Klunk, saxophone—rehearsed the music and played it through a few times. The composition included a mashup of Paul Robeson’s “Let My People Go,” and Duke Ellington’s “Come Sunday.”

As Weber explains, Lamb arranges a song that inspires him, then crafts an original tune from that inspiration, intertwining the two versions to create a third song. “In the case of Blues & Hues, we’re spotlighting Duke Ellington and his ability to transcend racism through his popularity,” Lamb explains, pointing out that Anacron’s poignant rap on racism makes several Ellington references. “Ellington was able to get black people into the Cotton Club, where they weren’t allowed before. He was making [the club] so much money that he said, ‘Look, you have me there, so you let my friends in or I’m just not there anymore.’ So they made a money choice.”

Once rehearsed, Germain had the responsibility of capturing the best technical, as well as emotional, performance. He started by recording the passes and mixing them on the spot at Studio A’s 72-input Neve 88RS console. “I used an LA2A across the bass,” Germain adds. “I used Summit TLA100s across Anacron, as well as the two sax mics, just lightly touching. On the stereo bus, I had a Neve 33609. I’m not doing much with it. That’s it. I’m pretty minimalist because the more stuff I put in the signal chain, the more stuff that can go wrong.”

Germain says the virtues of live-to-two-track recording come out in the excitement of the moment, followed by the reward that comes with the finished product. And although the preproduction, scheduling, preparation, and whatnot can take as much as a year, when it comes to the recording, everything is usually done in one day, mastered the next day, then released the following month. In this case, it was finished on a late February Saturday, mastered on a Monday and is scheduled to be released this month.

Weber, meanwhile, appreciates that live-totwo-track recording is affordable, emotionally satisfying and sonically superior. ”We’ve eliminated the recording onto a digital audio workstation like Pro Tools, we’ve eliminated all of the mixing, so it goes just to the final stage. You can hear the difference,” Weber insists. “The immediacy of a live-to-two-track project is exponentially superior to a finely mixed multitrack effort. The players may even play differently, knowing they can’t fix it. There is that intangible quality to the live performance.” Next stop…Blues & Hues Chicago. ■